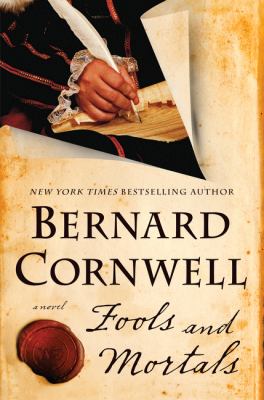 Bernard Cornwell is by far the best historical novelist working today, agreed to by readers and writers. Up to now, his forte has been medieval England, replete with blood and gore. His hero has been Uhtred of Bebbanburg a fearsome warrior of the time.

With this book, he does a 180 and takes on none other than William Shakespeare. The man knows no fear. The title  comes from A Midsummer Night’s Dream, act 2, sc. 2, line 115, for those who like to check.

Fans of the bard, y’r humble correspondent being near the top, will no doubt have some getting-used-to reservations, for Cornwell gives his Shakespeare some qualities not generally referred to as nice.

Richard Shakespeare, brother of the great man, has left home at Stratford and has come to London to become an actor. This does not sit well with our hero, who gives the younger Shakespeare a hard time throughout the book.

Old Shakespeare folks will recall that women were not allowed on stage in those times, and al female roles were performed by young boys with high voices and wigs. This becomes Richard’s lot..

Those same folks will also recall that theaters within the city limits of London were banned by the Puritans. So the theaters were outside  the city limits. There were no copyright laws in those days, so manuscripts were closely guarded. One of these valuable manuscripts goes missing, and suspicion falls on Richard. He goes about the business of proving himself innocent in some very entertaining ways.

Very little else can be written without the odor of the spoiler following. Shakespeare devotees or not, this one is just flat-out fun.

Reviews are provided by library patrons and staff. If you’re interested in submitting a review, please contact the library.

This title is available for checkout at our library; unfortunately, it is too new to be ordered from other libraries in the PINES system.